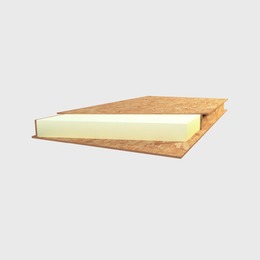 H-Block® is a patent law protected insulating SIP construction panel, made of polyurethane foam encapsulated in a box structure and permanently connected to a wood-derivative lining OSB.

An insulating structural panel is an example for energy-saving and environmentally-friendly construction materials of the highest quality, which are based on the experience of Western markets.

The panels are not harmful to health and do not contain any hazardous asbestos, glass or mineral fibres.

The H-Block® insulating construction panel is simultaneously a structural and shielding material.

A lightweight, but very durable, H-Block® structural insulation panel is a structural material for construction of load-bearing and / or shielding walls, ceilings, roofs and floors in single- and multi-family residential buildings as well as public utility buildings.

Although it is used primarily as a load-bearing element, it can also be used as a filling for wooden, steel or reinforced concrete structures.

At the same time, the H-Block® insulating construction panel is the highest-class thermal insulator, and hence – a perfect material for erecting energy-saving and passive buildings.

The closed-cell polyurethane foam constituting the core of the H-Block® panel is the insulating material with the highest thermal resistance from among insulation materials for construction insulation which are available on an industrial scale. In addition, it is resistant to most organic solvents, acids, alkalis, insects, rodents, fungi, moulds, water and temperatures up to 230 ° C. It does not change its insulating properties over time, does not age or does not absorb moisture. In combination with OSB and box structure, it is a very strong composite material that allows transfer of building walls loads up to 4 storeys, laying ceilings without beams and designing of self-supporting roofs or with a roof rafter framing reduced to a minimum.

The H-Block® structural insulation panel is produced on the production line under strictly controlled factory conditions, which ensures its high quality, allows adaptation to an individual architectural design and makes the construction process independent of the weather. The panels are sufficiently firm and stable, they are also characterized by high resistance. Thanks to its unique mechanical properties, H-Block® is used in the construction of walls, ceilings and floors, as well as roofs. It provides resistance and durability, which exceeds the traditional methods of creating roofs or walls, and also guarantees protection against surges. An insulating structural panel is a versatile application, and the simplicity of assembly shortens the waiting time for the implementation of a given project – this information is particularly important in the case of renovation.

As a result, the H-Block® insulating construction panel creates a very simple, durable and energy-saving construction system, which makes it possible to reduce not only investment costs but, first and foremost, the operating costs of the building. The offer includes two types of panels: H-Block® and H-Blockplus®. 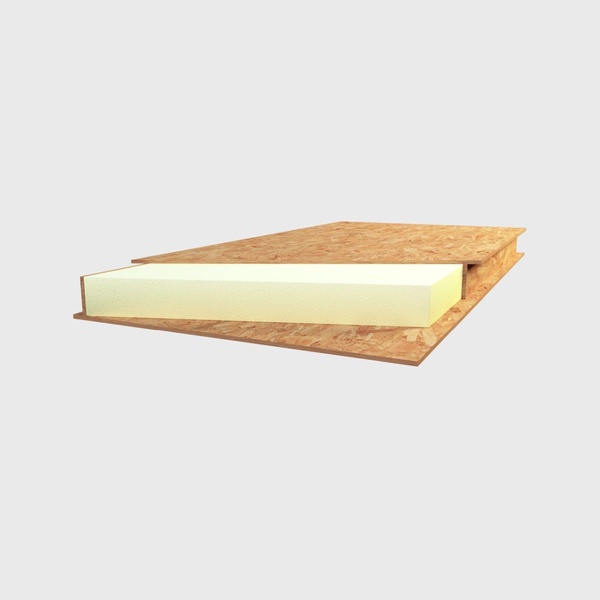 H-Block® is an insulating construction panel for the construction of load-bearing walls and roofs with a reduced roof rafter framing.

Structure: The panel is made to measure for a specific design with the width of up to 1.25 m and the maximum length of 12.50 m, it has two OSB webs built in in the distance of 4-6 cm from the side edge. The space between the webs is tightly filled with PUR foam. Wall panels are joined using the LHB connector filled with polyurethane foam. Thanks to this the thermal bridge effect is reduced, creating a well-insulated, uniform wall or roof surface. 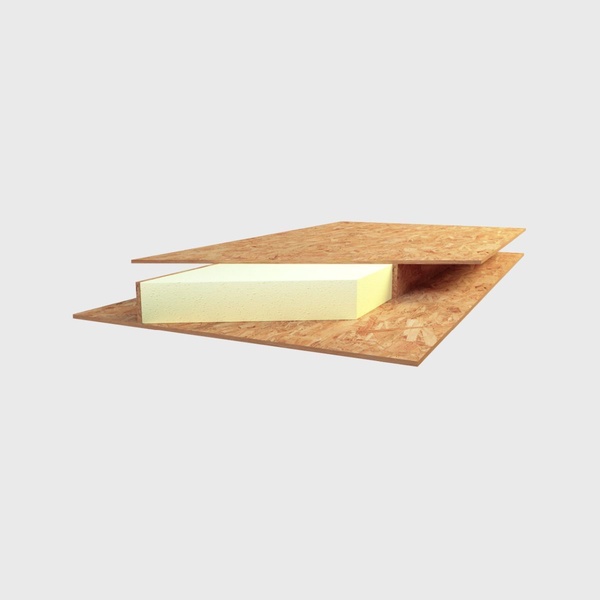 Structure: The 1.25 m wide panel has two plywood webs built in the distance of 31 cm from the side edge. The space between the webs is filled with PUR foam. The panels are joined using the LHBplus connector filled with polyurethane foam. Thanks to this, the thermal bridge effect is reduced, creating a well-insulated, homogeneous wall, ceiling or roof surface. Thanks to the increased load-bearing parameters, it is possible to reduce the traditional structure elements (roof rafter framing, ceiling beams) necessary for construction.

Thanks to its unique features, the H-Block® system is distinguished significantly from other technologies for erecting buildings.

Additionally, thanks to the use of the LHB connector during assembly, the thermal bridge effect is reduced, creating the well-insulated, uniform surface of the floor, wall or roof. 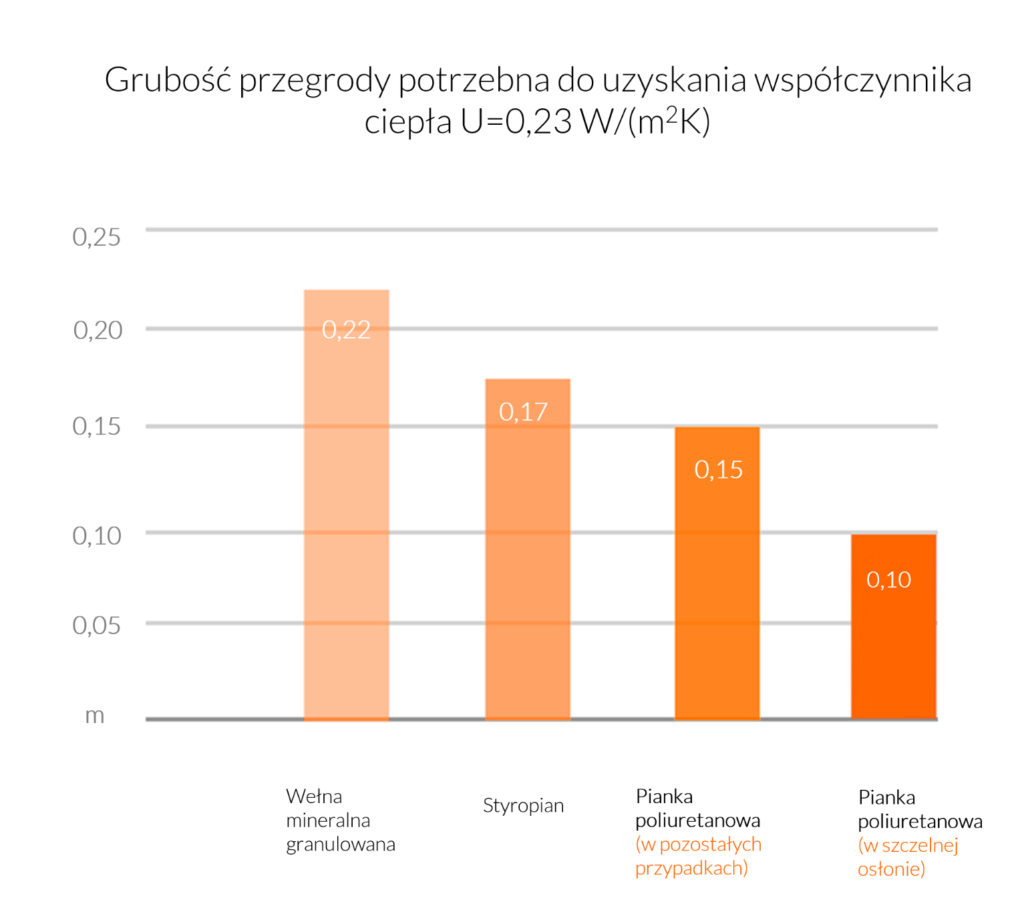 H-Block® is simultaneously a LOAD BEARING and INSULATION module!

Thanks to the use of a core with the closed-cell PUR foam integrated with the double T structure and linings made of OSB panels, H-Block® is characterized by very high bending strength, which allows, among others:

The short time of assembly of ready-made elements makes it possible to build a house in just a few days - regardless of the weather conditions and the season. The production of panels for all buildings in our systems is adapted to a specific project. This means that the already cut and numbered panels are delivered to the construction site, which only need to be connected with each other like LEGO bricks using the “instructions” provided by us.

Research carried out by Reed Construction Data RSMeans Solutions for BASF showed that the assembly time of a house with the area of 110 m2 in a wooden skeleton turned out to be more than twice as long as in SIP technology.

In addition to quick assembly, it is worth paying attention to the fact that due to the very small number of elements (in contrast, towards e.g. traditional technology) the possibility of making any assembly errors is reduced to an absolute minimum at the very beginning. 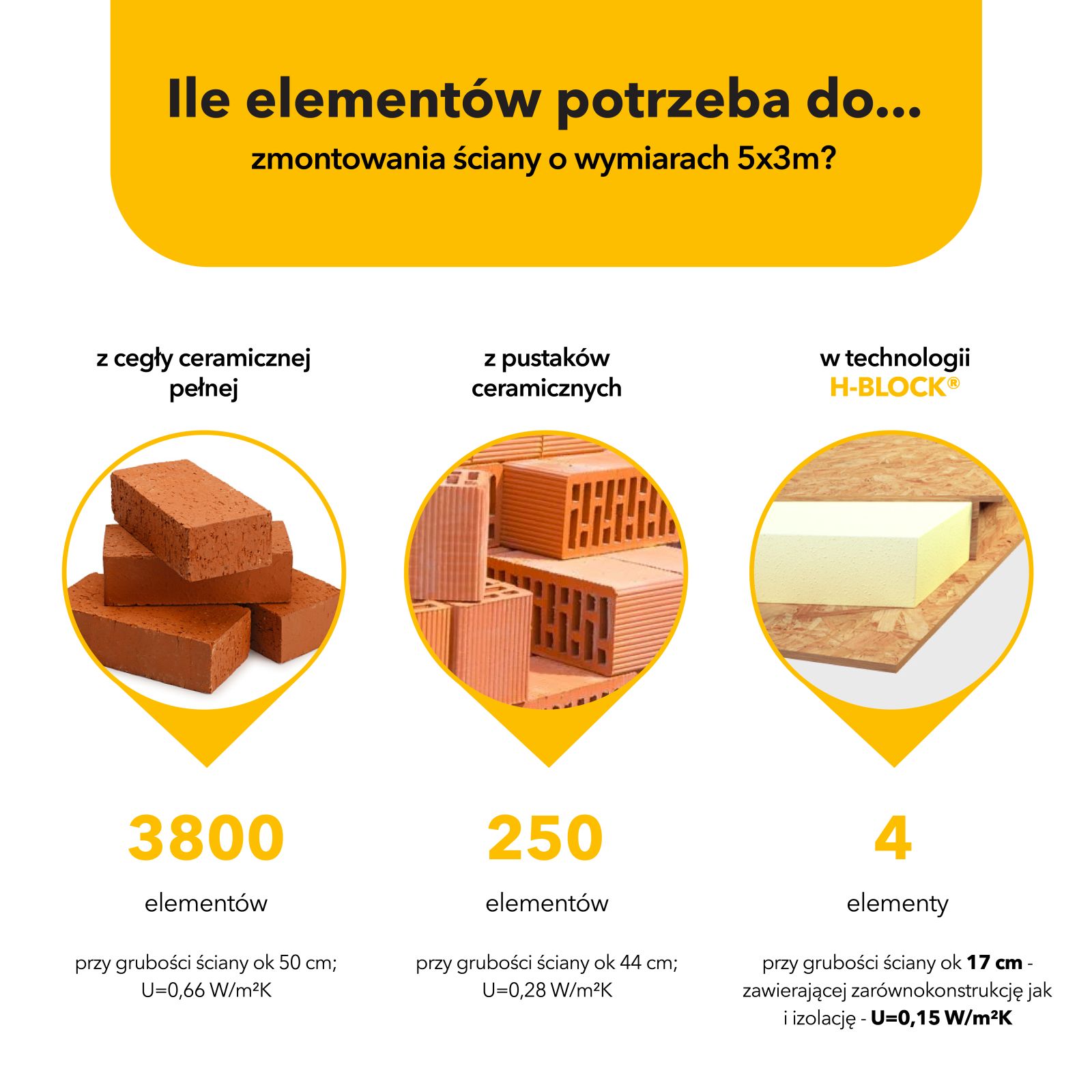 The closed-cell foam filled with the H-Block® panel is injected in a press under pressure into a closed mould. It grows and fills the entire box – that is, the entire wall element. PUR foam does not absorb moisture, does not settle, does not exhale it, does not lose its properties over time. In addition, all elements – LHB panels and connectors, are assembled with a low-pressure assembly foam, which guarantees tightness. This guarantees a high level of resistance to vapours and air throughout the whole life of the product.

If you compare other technologies, the insulation layer of mineral wool or foamed polystyrene with the same thermal permeability (U = 0.22 W / (m2 · K) is 50% thicker than in the case of using polyurethane foam, which significantly affects the wall thickness. Due to the fact that H-Block® is also a load-bearing and insulating module, the thickness of walls and roofs of buildings in the H-Block® system is more than twice smaller than that of traditional buildings, which enables: 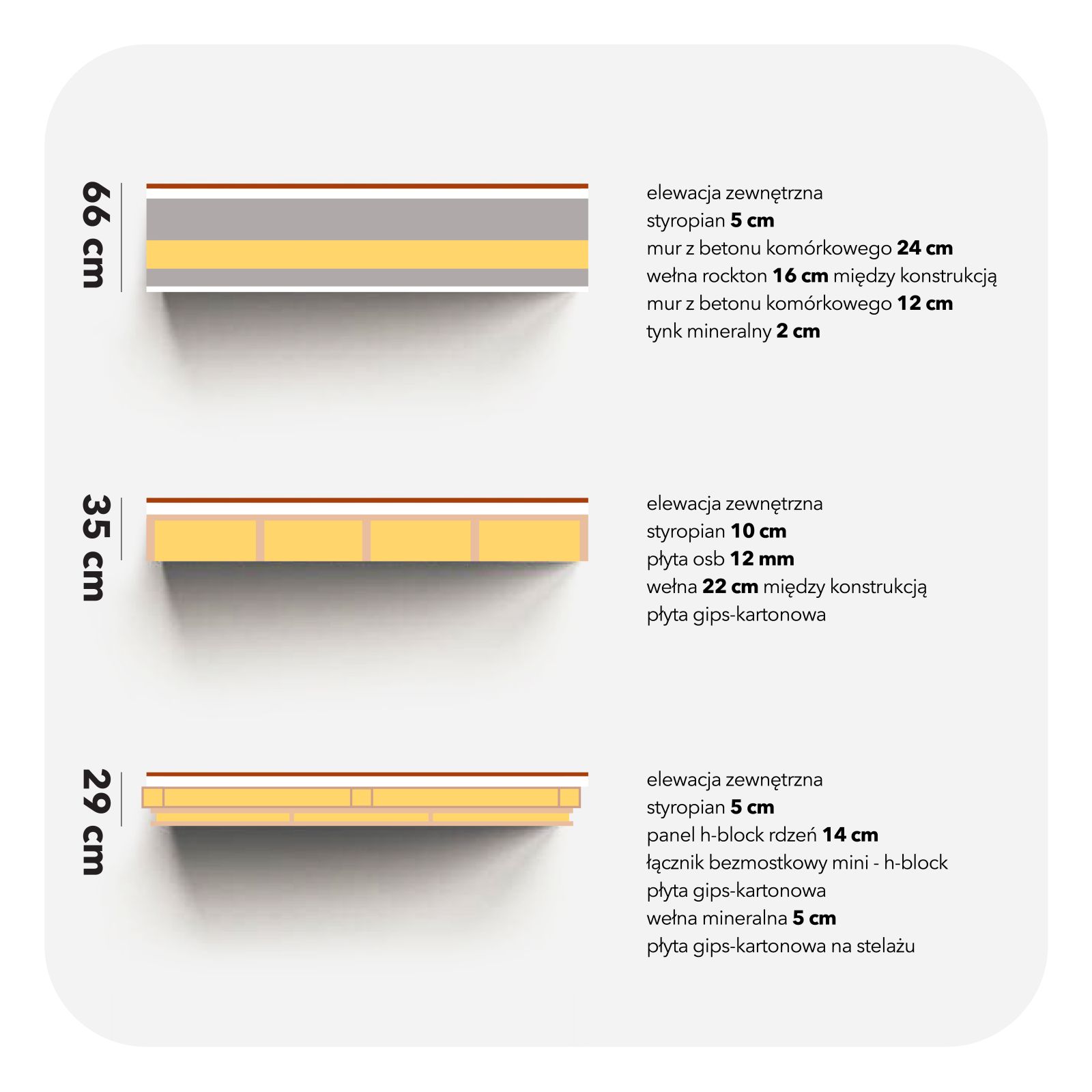 Rigid polyurethane insulation with closed cells, which is the core of the H-Block® panel, does not change its insulating properties over time, does not absorb moisture and does not melt at high temperatures occurring periodically on the roof. In addition, PUR foam is not subject to infiltration by water vapor or air, does not sag, or does not slide down, it is also very difficult to crush it. It is resistant to most organic solvents, acids and alkalis, insects, rodents, fungi and moulds, water as well as temperatures up to 230 degrees C.

H-Block® panels can also be used to build flat roofs, which causes that they are often exposed to dynamic mechanical loads, e.g. pedestrian traffic or small vehicles. These loads occur during construction or in connection with the regular maintenance of the roof and the equipment mounted on it. Unlike some fibrous insulation materials, PUR polyurethane foam is insensitive to pedestrian traffic and loads exerted during normal maintenance. What’s more, the structure of the H-Block® panel ensures high stiffness of the entire roof cover. This in turn makes it possible to use the H-Block® panels as a construction concentration, and consequently it leads to its slimness and savings resulting from this fact.

Thanks to it, it is possible to “panelise” almost every object and to optimize the use of panels so as to minimize the amount of waste on the construction site, and thus to reduce costs. The H-Block® system also provides complete freedom in terms of roof covering and façade finishing.

SIP panel is not equal to H-Block…
…. and this in many respects ‼️ 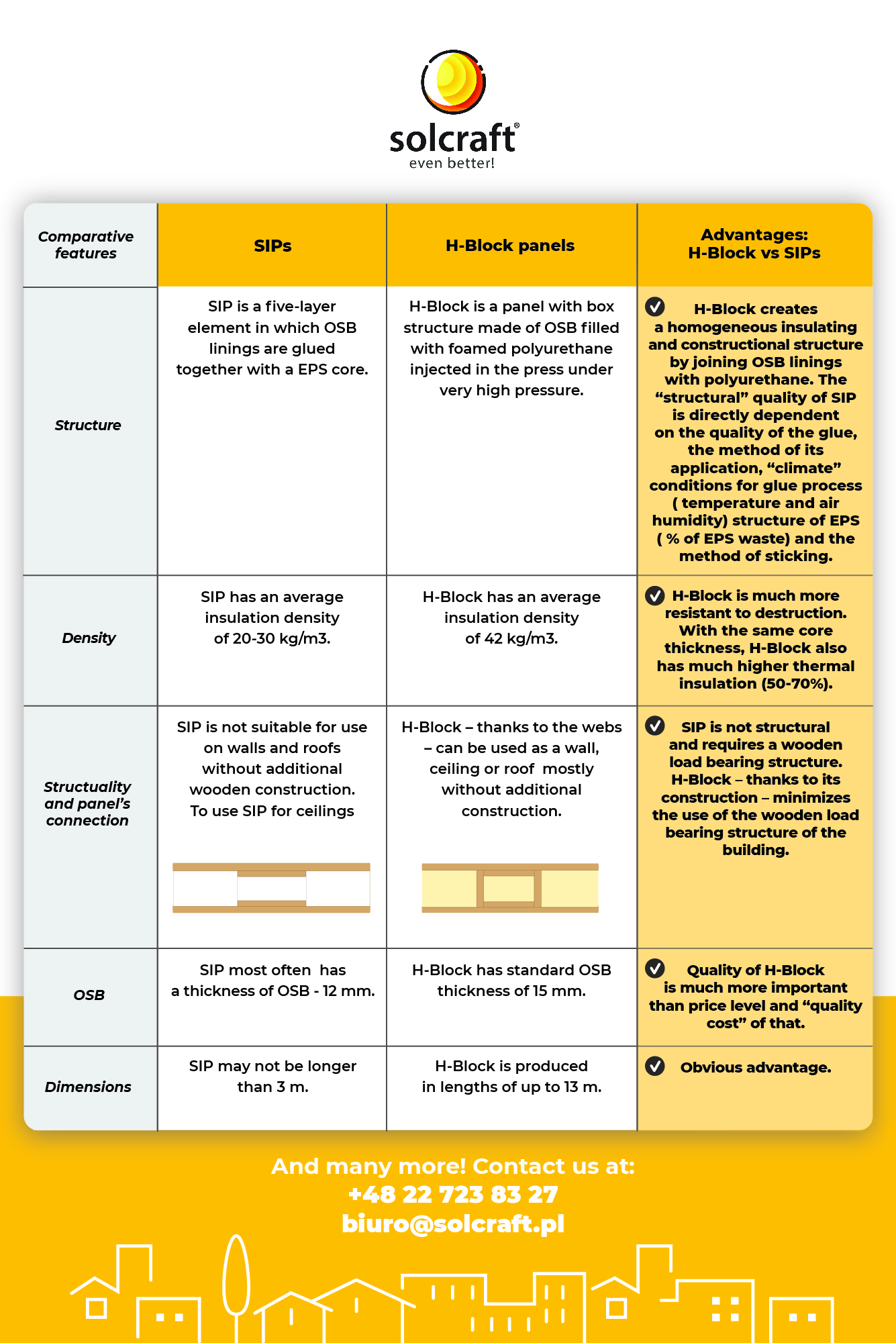 Strength of the technology – case study

Scientific research has shown that the structural integrity of a building made of SIP panels is significantly better than a traditional skeleton house in terms of resistance to compression, bending strength and increased load capacity.

Since their creation and application in 1930 (including houses built by Frank Lloyd Wright), SIP panels have been subjected to many extensive tests, also by external institutions. They proved to be a better alternative to traditional frame constructions: 2 × 4 or 2 × 6, or even constructions made of expanded polystyrene blocks, regardless of the type of insulation: glass fibre, cellulose or insulation blown by foam used in walls or roofs.

If laboratory tests are not sufficient proof for everyone, there are many examples of houses in SIP technology which have been standing for many years without any damage to the structure or its weakening. In addition, many homes in SIP technology survived earthquakes and hurricanes in regions where homes made in other technologies have been completely destroyed. The ability of buildings to survive in SIP technology against a powerful force of nature is probably the best proof of their ultimate durability. 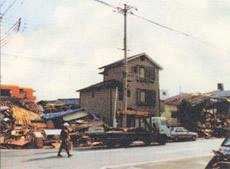 On January 17, 1995 the earthquake with magnitude 7.3 on the Richter scale hit the Japanese island of Awaji near the city of Kobe.

At that time 6,434 people were killed, of whom as much as 80% were crushed by furniture or rubble of houses.

This was mainly due to the fact that many structures were not prepared for increased seismic movements.

They did not meet the strict standards introduced in 1981, according to which in Japan you can build only shock-proof houses (which bend and do not collapse like houses of cards).

It is in Japan that about 10% of all shocks occur in the world.

As SIP technology gained the reputation of an extremely strong construction system still in the 1990s, an increasing number of Japanese decided to buy and build houses of SIP panels from American manufacturers.

It was documented that during the 1995 earthquake, six three-storey houses in SIP technology were located between 10 and 20 miles from its epicentre. All six houses, in contrast to the surrounding buildings, survived strong shocks without damage in the structure, and their brick facades and stucco facades remained intact. After that event, Taisei Corporation housing division decided to sign a contract with American SIP panel suppliers. To quote Yasuhiro Morita, general manager of Taisei Corporation housing division, 1998: “Even new homes in the area, built according to rigorous standards, have failed the exam in comparison to SIP panel houses. So, we decided it was the right time to import SIP panels to Japan. 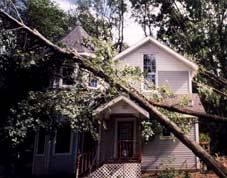 On March 20, 1998 tornado hit the locality of Clermont, Georgia, US. During the tornado, 27 houses made in traditional technology were completely destroyed. Only the house made of SIP panels remained almost intact. Only the shingle on the roof and 25 trees around the house suffered – the structure of the building remained untouched.

Louisiana, year 2008. hurricane Ike. The house in the SIP technology, as the only one in the area, survived the wind with a power of 230 km / h. The remaining houses were swept away from the surface of the earth. 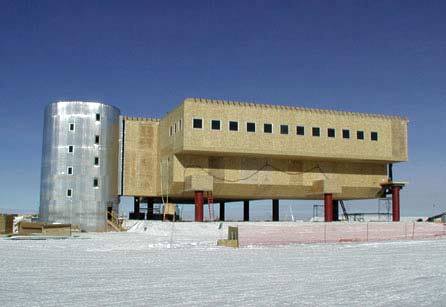 Fast assembly time and high insulation of SIP panels are the main factors that decided that the station with a total area of 5,500 m2 was made in this technology. 98% of the Antarctic area is covered by a polar ice cap with an average thickness of 1.9 km.

It is also the coldest, driest and windiest continent. The average annual air temperature at the station location is -49.3 ° C. 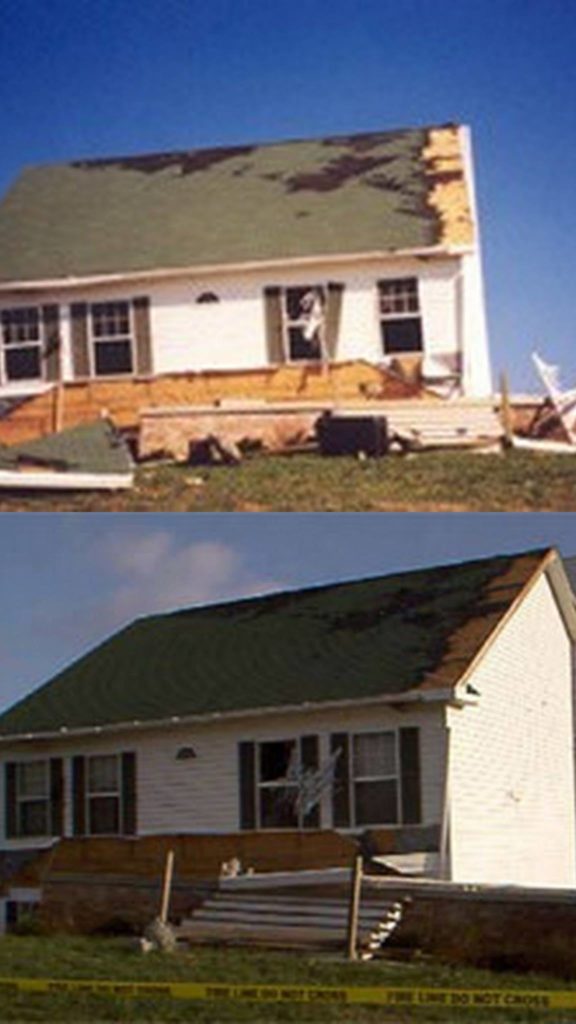 A couple decided to build a two-storey house with SIP panels due to their durability and energy efficiency. One evening a couple was awaken by a terrible noise. It was a tornado heading towards their home. Fortunately, it turned out that the house, in contrast to others in the area, survived the wind at a speed of nearly 320 km / h and remained almost intact. The only damage was two broken panes in the windows and torn shingles.